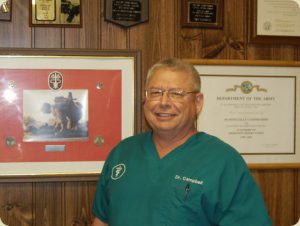 Dr. Campbell started working at his hometown veterinarian’s when he was 11 years old, cleaning and doing kennel work. He worked there through high school. Graduating in 1971, he enlisted in the U.S. Navy. After marrying Carolyn in 1974, they moved back to their home town in 1976, and Dr.C started college at WSU in 1978.

While attending Wright State, he worked at the veterinary clinic in Huber Heights and became a licensed Animal Health Technician in 1979. His love of animals and attraction to science and medicine resulted in taking pre-vet courses as an undergrad. In the fall of 1980, Dr. C transferred to the Ohio State University, double majoring in animal science and zoology/herpatology. In January 1980, Christy Lynn, Dr. C’s oldest daughter was born, and he was accepted into the Veterinary College- what a great year with many blessings! Dr. C. and Carolyn’s second daughter, Amy Leigh, arrived while Dr. C was a sophomore. He graduated The Ohio State University College of Veterinary Medicine in June 1984. The family moved to Springfield that same year and Kelly Renee was born during his first year of practice. After two years in a partnership, Dr. C. opened Veterinary Services of Springfield in July 1986.

Dr. Campbell stayed in the Army National Guard/Reserve and was commissioned into the US Army Veterinary Corps as a 1st Lieutenant in 1985. Promoted to Captain in 1988, and after several alerts for small military actions, he was called to extended active duty in 1990 in support of Desert Storm. Dr. C commanded the 432nd Veterinary Medical Laboratory. After a 9 month tour, he was released from active duty and back in his practice in 1991. Dr. C. retired from the U.S. Army Veterinary Corps, as a Major, in 1996.
Dr. C. attends church at South Gate Baptist, loves off-road racing, is a Team RFC chaplain and enjoys playing bluegrass (at least trying to play bluegrass) on his 5-string banjo. He has 3 daughters, 9 grandkids. 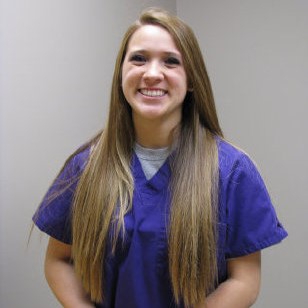 Bailey has been working for VSOS since September 2014. She works as a Veterinary Assistant in our office. Bailey graduated from Northeastern in the spring of 2014. Bailey is a great event planner; helping us with our Bluegrass Festivals. She is currently in an associate’s degree program, working towards her license as a Registered Veterinary Technician.

Bailey has always been an animal lover and was involved in both FFA and 4-H while in high school. Bailey lives on a farm where she raises and shows goats. Bailey specializes in Boer Goats and sells kids to 4-H participants. She stays very busy between home and work! Bailey enjoys spending time with her dog, Uriah. You will often see him at some of the events we support. 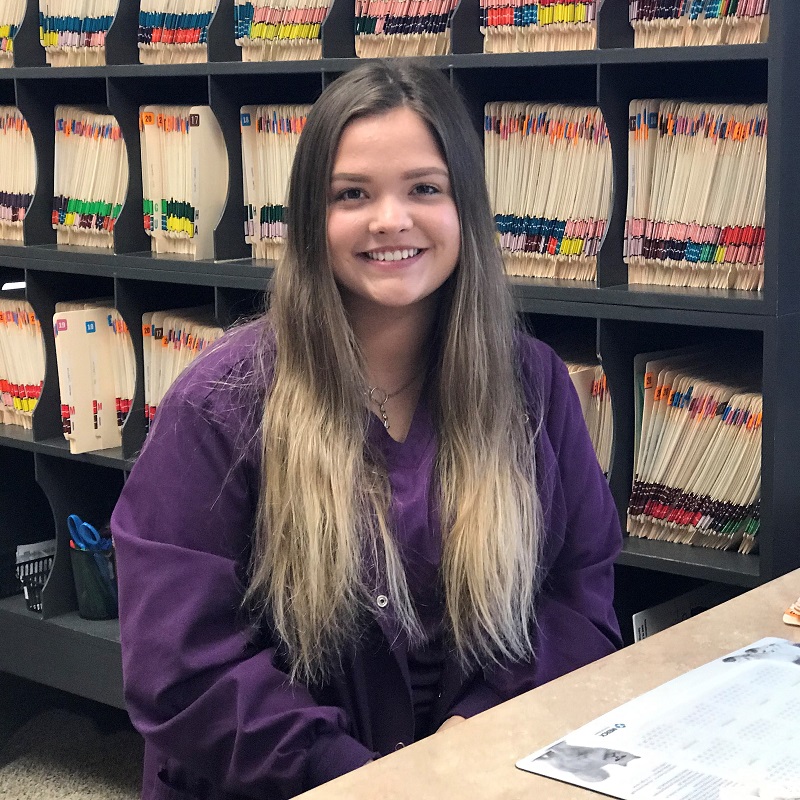 Hayley started at VSOS in February of 2020. You will find her at the front desk as one of our receptionists. She is a health science student at Sinclair. She has always had a passion for helping people and their animals.

In her free time, Hayley spends time being entertained with her two cats, Nugget and George. She loves to paint and travel. She spends a lot of time outdoors, and has even been on a 20 mile hike up a mountain! There is never a dull moment in her life.

Font Resize
Contrast
Accessibility by WAH
Call Us Email Us